That seems to be my status quo since we moved. Content. And I'm not saying everything is easy. Not in the least. It's more like.... 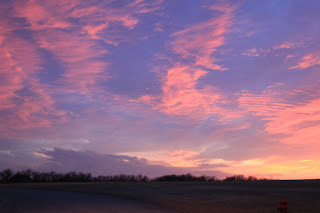 I'll be driving down the street, rehearsing something in my mind, furious at something said or done to me or someone else, and realize I'm the only one on the road and I heave a breath and discover that under all that fury, I'm content.
Posted by Chaos-Jamie at 9:15 AM 3 comments:

Labels: Only in the 'Boro

Superboy and his X-Ray Vision

Charming: I have X-ray vision
Mom: You do?
Charming: Yep. I can see frew fings.
Mom: Really? That's cool.
Charming: Yup. It only work on some fings, though.
Mom: What things are those?
Charming: I see frew windows.


Charming: I using my X-Ray vision
Dad: What do you see?
Charming (holds Sonic cup up to his face): I see peach. Yep, it's peach.

Never mind he'd already had half the cup.
Posted by Chaos-Jamie at 4:26 PM 2 comments:

Only in the 'Boro, Mail Edition

My parents and I are both on rural delivery mail. Why, I'm uncertain, as we both live In Town according to most anyone who would visit our homes. Granted, we live on opposite sides of our one mile by two mile town. (They live on the eastern side of the two mile stretch, I, on the southern end of the one mile half.) Although if you were to get technical, I'd bet the town is larger than one by two if you were to walk it out. Which brings us back to why we live "in town" and yet are on the rural route. Apparently the United States Postal Service drew city lines and never shall we go beyond.

Try THAT in the Johnson County suburbs. And yes, I'm speaking to you Shawnee, Lenexa, and Olathe and your massive western expansion.

Anyhoo....my parents' mail comes between 10:30 and 11 AM most days. Mine comes sometime after 2:30, but always before 3:30. Apparently the rural route driver starts west and heads counterclockwise to deliver. Which kinda bums me out, but that's another blog. One I imagine I've written if you go far enough back in my naval gazing to find it.

So, yesterday I was sitting at my parents' table, drinking my coffee and looking out at the birds when the mailman drove up. Instead of dropping the mail in the box and driving on, he brought a package to the door. My dad met him and I overheard the following conversation:

Is that Amy or Jamie?
It's Jamie, here for coffee.
Does she want her package?

OK, first: Seven years I lived in the last house with the same postman. In seven years he couldn't figure out that neither RMS Vending, nor the compulsive gambler Steven Sanders (I'm only guessing this due to all of the online gambling mags we got for him, (if, on the random googlies Steven Sanders cares about his reputation and finds this....you should have let all those gambling sites know you moved)) were any longer residing in our house. I finally just quit writing "not at this address" and returning them and instead threw them away.

So you can imagine my humor to find that my postman recognized me, recognized my parents, recognized that though I don't have the last name my parents have....that I might want my B&N delivery five hours earlier than I would get it traditionally.

All this on top of Thursday's UPS delivery directly into my garage.

Labels: Only in the 'Boro

For the last two days Valentines Day has been the primary conversation topic on Facebook. Who got what, photos of flowers, chocolate, cards, excited exclamations of "going to Vegas!" and "best Valentines EVER!" And then there are the single people who hate Single Awareness Day and go into a three day funk because they didn't get overpriced flowers from someone who has been reminded every day for the last six weeks to think of their special someone. 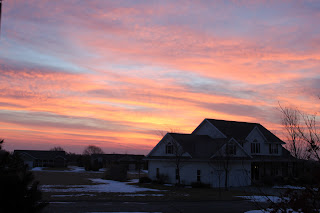 My gift from the lover of my soul.
I can't make myself really give a hoot about this Day of Love. I'd blame the boyfriend of mine for dumping me on or near Valentines day in the sixth grade, but it seems like maybe I should be over that as we are both happily married to other people. I'd blame the fact that it's my mother's birthday, but I think that's just an excuse for me to pretend it isn't a holiday that needs anything but birthday cake. I'd blame the fact that I worked at a flower shop during February once and saw with my own little eyes that they do, in fact, double the prices of arrangements the week of Valentines. I wonder if I'm just jaded about anything that puts a price on love.
On Sunday, when we'd dropped in at Alco to buy a birthday card for my mom, I decided to also grab valentines for my kiddos. Though it was her birthday, my mother always had a heart shaped box of chocolates sitting on our pillows when we woke up. (You would think this alone would make me love the holiday.) While in line there (after scoffing at the various gifts Alco offered for sale), Hubs accused me of robbing him of any valentines gifts and THAT'S why I never got anything. "You've ousted flowers, you've ousted jewelry, you've ousted chocolate...."

And of course, this conversation happened because I offered to go buy myself flowers at the grocery store. Which I did, while buying groceries, and picking up flowers for my mother and Gramps (from Charming who insisted Granny wasn't the only one in need of flowers). Which really means I didn't so much buy them for myself as swipe a few out of their bunches when we put them in the vase. 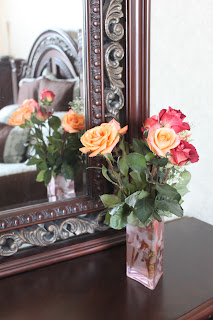 My gift to myself, using Hub's money, which I would have skipped had I'd known.
And now the truth comes out: When we were first married, we were broke. I couldn't abide him spending money on flowers that would die in a week when we needed important things like vacuums, or groceries. I don't want him to buy a necklace in a certain shape just because the guys in jewelry design decided that three diamonds in a row symbolized past, present, and future, or whatever. I think this year it was overwhelmingly the open heart collection, but I'm not sure as we have (thank my heavenly father above) DVR.

I don't know why I'm such a crankus about Valentines Day. I guess I would just rather my husband showed up unexpectedly on a Tuesday in June with a flat of annuals for me to plant. That's what says. "I know you" to me. Or a bag of sour gummy worms. Or better yet, a frozen cappuccino from Quick Trip.

This year, after I came home from the grocery store, I discovered a bunch of flowers on my table. During our discussion at Alco, I told him he was allowed to buy me flowers now that we have two dimes to rub together....as long as he bought either the bunches at the grocery store OR a potted plant that won't die. But I'll be honest, I didn't expect him to. I expected him to thank me for buying my own flowers. Instead, I think he was a little exasperated that I did. 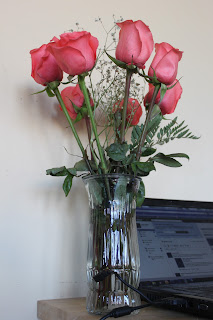 The flowers from my lover. Notice their prime location next to the computer.
Later, we had my parents over for a birthday dinner and then we went to watch our middle son perform as a rapping beaver in the grade school production of The Bear Went Over the Mountain. It was so humorous, my cheeks ached all evening. He then put the squirts to bed, primarily Charming who was making me ca-razy. And disappeared downstairs to watch the shelacking of the Jayhawks while letting me go to bed early. The man knows me. 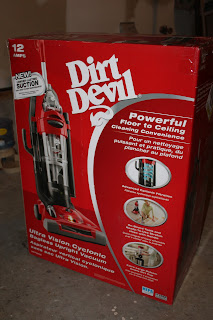 That, and he let me use my Valentines money saved to buy a new vacuum.

I think I'll keep him.

And rejoice that Valentines Day won't come around for another 363 day.
Posted by Chaos-Jamie at 2:24 PM 1 comment: 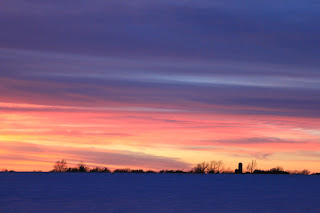 For all my city friends who have heard me lament the lack of sunsets. God gave me this beauty last night.

I actually gasped when I looked out the window. Stood up from dinner with food in my mouth, grabbed my camera and had five minutes alone with my sunset and its Creator.

, who questions whether I live close enough to call it country: this is what is on the other side of that row of houses. I know Tami wouldn't agree, but after what I've come from, I'll call it close enough.
Posted by Chaos-Jamie at 4:52 PM 3 comments:

you know you've moved to a small town when...

You get excited when the grocery store is selling a product you thought was discontinued. You buy it out (it is, after all, on sale and you loved said product) and excitedly rip into aforementioned box to discover they have, in fact, been discontinued. Telltale sign: stale and hard.

Shelf life around here is insane.

(Note: They have not replaced the product I bought out last month.)
Posted by Chaos-Jamie at 8:27 AM 2 comments:

Labels: Only in the 'Boro
Newer Posts Older Posts Home
Subscribe to: Posts (Atom)
Act as if what you do makes a difference. It does.
--William James