In the words of the amazing Susan May Warren (with comments by Chaos):

Sometimes, do you feel like you just don't fit in? Um, yes. You look around you and think that if anyone knew how difficult it was just to put yourself together, to smile when you feel completely overwhelmed, to even figure out what you were making for supper, they'd know what a mess you were. Have you been secretly taping me?? Do you feel like when you look in the rearview mirror, all you see are your mistakes? Um, hi. We are talking about me here, right?

So, if you followed some of that line of thinking, you need to check out her latest, Nothing But Trouble. PJ, the heroine, just can't get it right. Trouble just seems to follow her no matter how hard she tries to stay on the straight and narrow. No manner of her best intentions pan out.

You might just like her. Who likes to read about those girls that have it all together, anyway? Unless you are one of those that has it all together and then one must ask, why are you reading my blog? 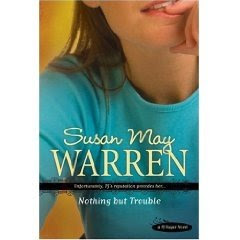 After traveling the country for ten years hoping to shake free from the trail of disaster that’s become her life, she needs a fresh start.

The last person she wants to see when she heads home for her sister’s wedding is Boone—her former flame and the reason she left town.

Her best friend’s husband absolutely did not commit the first murder , has seen in more than a decade.

What PJ doesn’t know is that when she starts digging for evidence, she’ll uncover much more than she bargained for—a deadly conspiracy, a knack for investigation, and maybe, just maybe, that fresh start she’s been longing for.

It's not fair to say that trouble happens every time PJ Sugar is around, but it feels that way when she returns to her hometown, looking for a fresh start. Within a week, her former teacher is murdered and her best friend's husband is arrested as the number-one suspect. Although the police detective investigating the murder--who also happens to be PJ's former flame--is convinced it's an open-and-shut case, PJ's not so sure. She begins digging for clues in an effort to clear her friend's husband and ends up reigniting old passions, uncovering an international conspiracy, and solving a murder along the way. She also discovers that maybe God can use a woman who never seems to get it right.

About Susan: Susan May Warren is the award-winning author of seventeen novels and novellas with Tyndale, Steeple Hill and Barbour Publishing. Her first book, Happily Ever After won the American Fiction Christian Writers Book of the Year in 2003, and was a 2003 Christy Award finalist. In Sheep’s Clothing, a thriller set in , was a 2006 Christy Award finalist and won the 2006 Inspirational Reader’s Choice award. A former missionary to , Susan May Warren now writes Suspense/Romance and Chick Lit full time from her home in northern .

Stop off at some of the other blogs for more insight and chances to win copies!

Thanks for posting this, Jamie! Hope you enjoyed the book:)

Loved it. It occurred to me hours after I posted that I never mentioned that little fact. Sometimes I can be such a dork. Kinda like PJ.