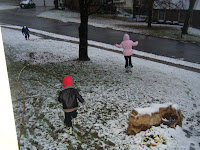 Good morning to you, too, son.

So while I should have been making breakfast and packing lunches, what was I doing? Rooting around for coats and hats and gloves. Because if the big kids are out in it, the Tiny Tyrant must be also.

Mom is such a spoil sport. I told them they could walk around in it, but I absolutely forbade them to "play" in it. No snow pants.

Eldest, whose idea it was to go out in the first place, refused to even go with that stipulation. Once I convinced him that that was foolish, Princess had already come in and since she wouldn't go back out, he wouldn't either. Even though the Tiny Tyrant and Frodo were still out.

And the reason I didn't want snow pants? Wet, drippy slush in my entryway. But TT took care of that when he brought in his snowman. 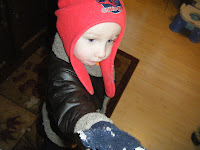 Do you see it? Right there in his hand? It's also there on the carpet behind him. Where he proceeded to stomp it.

Yes, there, where I stand in my socked feet to wash dishes.

Which is why I refer to this seasonal blessing as "SNooooooooooo!"
Posted by Chaos-Jamie at 9:47 AM

Try it in German, with the upper lip curled up in disgust. Schnaaaaaaa

Now everyone try it - lots of curled up lip!

You got much more than us. Our flakes just flew around and never landed.

I'm even meaner. I said "no" to anything, even just walking in it.