At the moment, there are three children doing a recreation of Star Wars upstairs, four heading out to the trampoline with a football (wait, I think one of them was in on the Star Wars play, make that two), three negotiating car trades in the living room (whoops, just lost one to the trampoline), two doing.....something, one irritated that so many kids are over.

I'm not sure how you do that math there, but I counted 10 at one point.

There go the last three to the tramp.

Aside from the one pouting on the couch.

There was a time I told Brent that I wanted to be the Fun House where kids went.

My parent's house was not it. And I was introduced to stuff I shouldn't have been in while I was at some fun houses. Some fun houses are safer than others. I want to be the safe fun house.

I do not, however, want the aftermath.
Oh dear. 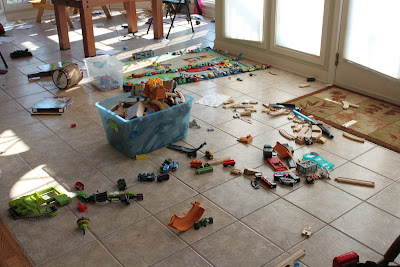 If I'm being honest with you, I have to say that when I went around the house with the camera, it wasn't as bad as I'd expected. Most of the mess is right here where I watched it happen.

I was told once by a dear lady that to keep kids at your house, you have to have The Food.
My food budget is already blown and it's the 14th.
I need to take out stock in popsicles.
BUT aside from the popsicles and popcorn, kids mostly don't eat our food. Apparently I don't have Fun House food.

I should probably work on that.

However, I think this is priceless.

Wait.....someone is crying.....make that two someones....
It's time to throw down some smack at the Fun House, again.
Which means it never really will be.
Posted by Chaos-Jamie at 5:53 PM

The quality of your photo work has increased remarkably since you got the Canon. Sr.