Joy in the Midst of Chaos

I've had to do a lot of looking for joy lately. It isn't wildly apparent. One could wonder why. I mean, spring came early. Our adoption case looks to be progressing somewhat rapidly after all those months of nothingness. And yet, I feel defeated. I'm exhausted. And then, there will be a moment where joy rises up within me and makes me pause and reflect on how good life is. Sometimes that moment is completely frivolous. Sometimes it is swirled up with frustration. And sometimes, it just is. 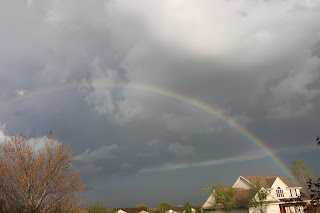 For instance: you might think this is joy in seeing a rainbow. Hey, I like rainbows as much or more as the next guy, but let me tell you, what brought me the most delight is that I was standing in the back of the house doing dishes when Princess pointed out that it was raining and sunny at the same time. To which I replied, "Perfect combo for a rainbow. I bet if you go out front you'll see one." The joy in being right. (Hey, this one comes very rarely.)

Dictionary.com: wonder (whun-der). Thunder (thun-der) Yonder (yon-der)
Mom: well, what do you know? I never would have believed it.
Daughter: told ya so.
Mom: if you ever want me to admit I am wrong again, you must be gracious about winning. That was far from gracious. That just made me mad.
Daughter: so can I use the computer?
Mom: After that snotty little remark, no.

This is only a joy story because I take joy in her self confidence.
And that I own the computer. 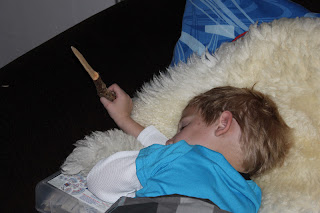 He's going to make a great boy scout. Always prepared. In his right fist is his "pocket knife," a piece of wood that is broken in such a way that it looks like a blade. Under his left arm is our emergency first aid kit that he's assumed as his own. If any boogy men attack, he's prepared to fight them off and patch them up. Mind you this is a couple hours after he's fallen asleep. 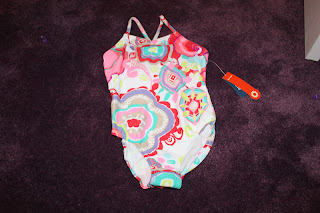 Little tiny swimming suit for my little tiny girl. It makes me happy to just look at it. 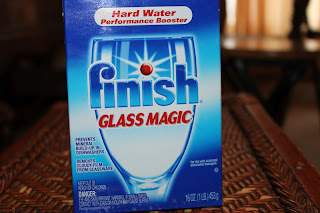 The water here drives me insane. All my glasses have this foggy film on them. All my coffee cups are coffee stained. Nothing looks clean. And then last week I happened upon this in the grocery store. Viola! Clear glasses. Coffee stains gone. Just. Like. That. 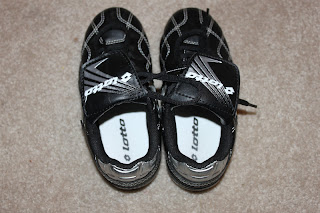 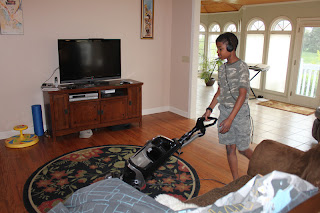 Yesterday after school it was raining, so the kids came home and crashed in front of the TV (not my preference). After approximately an hour, Eldest stood up, turned the TV off, grabbed his headphones and started tidying up the room. Joy, pure joy. 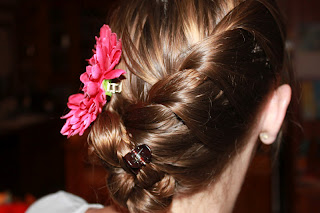 Getting compliments on hairstyles that take about 30 seconds to do. And wearing big fake flowers in my hair. Even in yoga pants.

There was a fuzzy picture here that was me in my yoga pants. You couldn't tell that is what it was, but it was here with a cutsie explanation about it. Somehow the cutsie explanation and the photo got deleted. So, I'm going for no photo, yes cutsie explanation: Yesterday Brent and I both had to leave the house. Which mean we both dressed up. Real nice. We wore jeans. As soon as we got home, I found him in the closet peeling his jeans off, where I also was, also peeling my jeans off. "You, too, huh?" To which he replied, "We'll both be in real trouble if we ever have to actually wear real clothes all the time." 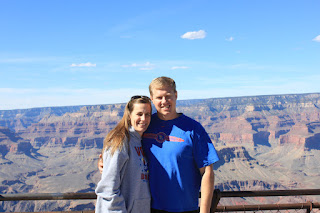 Over spring break, Brent drove me all the way to Arizona. Probably because I told him, "You can come or not, but unless you tell me I can't, I'm going." There was a lot of flex in our schedule, except for seeing the Grand Canyon. That had to happen on Friday. Friday morning we woke to one child complaining of a stomach ache and another barfing. We loaded the van to overflowing, handed the boys barf bags and took off. What we expected to be a four hour trip was closer to seven hours what with all the dipply little detours that his wife wanted to make and all the barf clean up stops. His only request was that we make it to Holbrook in time to see the Jayhawks play in the Sweet 16. (Guess which hotel doesn't have cable? Guess which town doesn't have an Applebees? Guess whose wife sent him out to buy sandwich stuff before she allowed him to go off in search of a crappy sports bar to see the game? (but in my defense, guess whose wife stayed in the cable free hotel room with, by then, three barfing boys so he could go?))

He brings me joy. He takes me on jaunts. He puts up with my crap. He drives me crazy. But he also drives me where ever I want to go.