For seven years, maybe more, I knew I'd sat out a pregnancy. At the time I thought I was just too tired to deal with it.

But there was a little girl that I now know was being born in Ethiopia who would fill that slot. For four years I referred to her as My April 2005.

Princess is June 2001, Frodo is May 2003, Charming is March 2007. Do you see the pattern? Most people don't and think I'm kind of a freak that I do. I'm OK with that. But I am asking you to acknowledge that I saw and felt a gap and looked for the missing link.

Today I call her several names. You know of her as Iris.

In September I made a post on Facebook, if not my blog, that said something like "today is the day we have chosen for our daughter's birthday." It was easiest, having her turn 6 in September so that she wouldn't be an old kindergartener.

Aside: after having met her? The child is 35 in a 7 year old body. I wouldn't have been fooling anyone.

And then a couple months ago I got a short note that said her birthday had been determined to be April 10, 2005.

After so many filled out forms with September 7, after best guesses at May 1, after 6 going on 36, she is the child I've waited for. 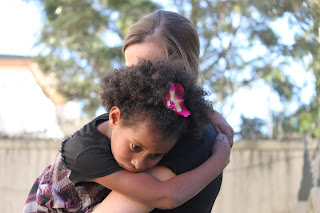 Today she is among friends.

But missing her birthday today hurts me.

Bless the lord oh my soul
Oh my soul
Worship his holy name
Sing like never before
Oh my soul
I worship your holy name
--Matt Redman
Posted by Chaos-Jamie at 7:13 AM

Oh, my. I'm crying right now- for a few reasons. I wish you could be with her today. I wish I could give you a hug today. And I am reminded how much God loves us. April 2005. Bless the Lord.