Ever since I was pregnant with Princess, my body/mind connection concerning nausea and hunger has been mixed up. I attribute that to the fact that when you are pregnant and hungry, it makes you nauseated. If you eat small amounts of high concentrated protein, the nausea goes away. I would wake in the morning and send B off for a glass of milk. If I drank it before standing, I never puked.

Since then, I've assumed that nausea meant hunger. Since then I've also been pregnant or nursing six+ out of the eight years.

The problem with that assumption is that it is sometimes wrong. I find myself starving hunger and feeding nausea. Especially at times like the present when children all around me are puking. If I wake to a pain in my stomach I'm pretty leery of putting much on it. So much so that I grow increasingly nauseated. And weak. And shaky. And generally all those hypoglycemic type issues that so closely mirror a stomach flu.

And have you tried saltines and Sprite lately? The combo, by itself, makes me nauseated. Whether I'm sick or not.

BTW, I've decided that I'm not sick. This after starving myself for 24 hours. I decided I just needed some food. 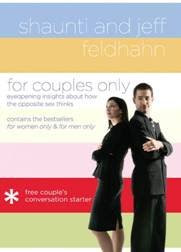 Are you ready for the classy segue? Here it is:

I think that, as couples, we do the same thing. All too often we treat what we think our spouse is saying/feeling/needing as we would like to be treated instead of remembering that they are not the same gender as we are. We are feeding nausea and starving hunger. And where does that leave us? Weak and feeling generally crappy.

For Couples Only Box Set:

Since their debut, these revolutionary guides have sold well over a million copies, been translated into fifteen languages, and sparked much fascinating water-cooler conversation around the country. Now together in the For Couples Only boxed set, these books provide the perfect resource to help you understand what you never knew about the woman or man in your life.

Each volume is based on input from more than a thousand members of the opposite sex—including an unprecedented nationwide survey and hundreds of personal interviews. This innovative approach yields candid and surprising answers about everything you don’t “get” about your significant other—even what that person deeply wishes you knew. It also produces simple but groundbreaking awareness of how you can best love and support the one who is most important to you.

So whether you are newly dating or have been married fifty years, get ready to know each other in a whole new way. The adventure is just beginning!

Shaunti and Jeff Feldhahn hold graduate degrees from and are popular national speakers, authors, and entrepreneurs. They are also active church members and the parents of two young children, and they enjoy every minute of living life at warp speed.

Despite the second title in this series (For Men Only), I even did a spot check on it. Yup, they pretty much say it like it is. And I am so grateful that my husband knows so much of this already. I've been a patient teacher and he has been a loyal learner. Meanwhile, I'm glad for the refresher course on how to deal with him and all his maleness. Time to stroke the ego a little instead of assuming he knows I appreciate how hard he works.

No sense starving hunger when I could feed it and make both of us happy.

I always tell the young men who are dating "If any man ever tells you that he has completly figured women out, he is lying."
I don't think men have the capability to figure out women. It's best to find out what they like & dislike and try to run your train on those rails. Even then, there is a chance of derailment.
Every resource helps.

This looks really good! I am currently looking for great marriage resources! I just might have to add list to my nightstand.

back to nausea, saltines and being with (or without) baby. 46 years ago, (Could this be the mystic Dad again?) I was on a troop shop on my way to those amazing lands across the water with my trusty rifle and a couple of boxes of saltines my dad (WW2 Navy Vet) told me to take. That's all I ate for 7 days - even with 40 feet waves and a hurricane. I never got sick - except home sick. Being all guys on board, there was no danger of being with baby. Lost 5 lbs in 7 days. So neeevvver put down saltines.