Blessed are those with weak bladders, for our coffers shall be filled.

Down the mountain, past the tanks, through Saint Peter's Fish and on to Capernaum: "The Town of Jesus, The Home of Saint Peter, The Synagogue," and, of course, the monastery built OVER the ruins of something important. So important, in fact, that I can't remember what it was. Peter's home? An early church? I don't honestly know. I think it was a church. It was built in a circle as was the chapel over it. Yes, I vote church of some sort. 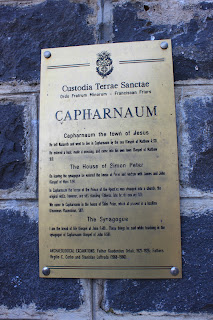 So, after apologizing about the fish situation, Tzvi gave us a lecture about the history of our location.
He tells us what the Greek inscriptions say. Can you believe this stuff just sits out in the weather. I guess they figure if it lasted this long, it's probably OK.
He tells us about the different pressing processes.
And then he says, "So, what do you think? Ten minutes we meet on the bus?" To which Spence, bless his heart, who has HAD IT, says, "NO! We flew halfway across the world to see this! We need 20 minutes, AT LEAST!" We got them.
So we took our 20 and visited the synagogue,
the town,
the chapel, and the sea (not here because it was already posted in the birthday post)
Took a few photos
Tried to get artistic and failed.
And skipped the potty break. At this point, Brent and I were looking at our schedule, doing a little math and figuring that we would make it back to the hotel with plenty of time to swim in the Sea of Galilee before the sun went down and it got cold.

You know what the word assume says, right?

Pit stop! We will visit a diamond museum. We will watch a short film about diamonds and THEN you can SHOP at our diamond STORE. Now doesn't that sound FUN?

One of our friends offered the guide $100 to just keep driving.

TWO hours later we were back at our hotel. And determined to swim even though it was freezing. I mean, how many chances would we get? Yes, it was "forbidden" to swim after sunset. Yes, the water was approximately 33 degrees. Yes, the air was a warm 50. Yes, we swam. Just long enough to take the photo. But, dang it, we swam in the Sea of Galilee.

You know how you make 50 degree air feel warm? Dip your bod in 33 degree water.

I always love your stuff, Jamie. And you never fail to make me laugh. Out loud. As I read...

Thank you for still hanging around.