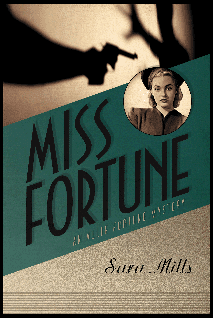 It's New Book Tuesday again and I have another great one for you! And just in time for Christmas shopping.

They call her the P.I. Princess.

It's 1947 and Allie Fortune is the only female (and perhaps the best) private investigator in New York City.

But she's kept awake at night by a mystery of her own--her finace disappeared in the war and Allie is haunted more by the unknown than by finding out the worst.

Her work is a welcome distraction, and she's just been hired by a client who isn't telling the whole truth. Mary Gordon's claims of innocence don't fit with her ransacked apartment, being shot at, and the two Soviet agents hot on her trail.

Meanwhile the FBI is working the case because a legendary and mysterious treasure has gone missing...again. The only catch for Allie is her new "partner" Jack, an attractive, single agent who knows how to make her smile.

As Allie and Jack chase after the gold, they must contend with the Soviets who also want the priceless treasure back--after all they stole it fair and square. (From back cover copy.)

This book was delicious. I stepped out of mysteries for a long time(I don't like to dream suspense), but I'm a returned fan. This book had it all. A past to deal with, bad guys that are really bad, the hint of romance...good stuff. But to tell you much more would be full of spoilers.

I will tell you this: I will never understand women who seem to have no need for personal safety. And Allie is one of those women. But I suppose women who cower at home don't make good P.I. heroines, do they? They make pretty good readers, though.

Write on, Sara. I can't wait for Miss Match.