When the Soul Mends by Cindy Woodsmall 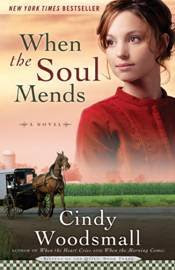 It's been a long time coming (August 2006 via November 2007) but Hannah has her resolution!

Ah, Cindy Woodsmall is some kind of author.

After receiving a desperate and confusing call from her sister, Hannah Lapp reluctantly returns to the Old Order Amish community of her childhood.

Having fled in disgrace two years earlier, she finally has found a satisfying role in the Englischer world, as well as love with Martin Palmer, a man with whom she can safely entrust her heart. But almost immediately after her arrival in Owl’s Perch, the disapproval of those who ostracized her reopens old wounds.

As Hannah is thrown together with former fiancé Paul Waddell to work for her sister Sarah’s mental health, unexpected truths surface about the events during Hannah’s absence, and she faces an agonizing decision. Will she choose the Englischer world and the man who restored her hope, or will she heed the call to return to the Plain Life—and perhaps to her first love?

This intriguing final novel in the Sisters of the Quilt series is richly textured with authentic details drawn from the author’s real-life connections with Amish Mennonite and Old Order Amish families.

Cindy Woodsmall is a best-selling author, who has garnered strong praise for the first two novels in the Sisters of the Quilt series. When the Heart Cries was a finalist for the ECPA Novel of the Year in 2007 and received the Reviewer’s Choice Award from the Road to Romance website. When the Morning Comes was named among the Best Books of 2007 for Crossings Book Club. Cindy lives in with her husband of thirty years.