I have a dream today 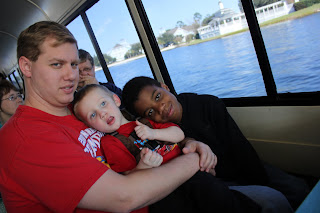 On Friday, my son was introduced to the imperfect world in which we live. He "knew" about civil rights, Martin Luther King, slavery....but now he KNOWS about it. His little world shattered and we're left picking up the pieces. It was going to happen. I know that. I thought I was working him into it. Apparently I worked him in too slowly. Or glossed over the ugly. Something. But when he saw footage of the brown people being shot with a fire hose (back in the 60s), he was traumatized.  He's having nightmares. He doesn't understand. Neither do I.

My heart is breaking.

Interesting fact about this: his worst dilemma is that if he lived back then his best buddy wouldn't be AM who is very white. It hasn't occurred to him that he wouldn't be in our family.

I'm glad he is. He adds such a lovely component. He's kind, sensitive, tenderhearted, (strong willed), service minded, compassionate and an awesome big brother. We wouldn't be the same without him.
Posted by Chaos-Jamie at 7:49 PM

AM and I are both very grateful that we are NOT in the 1960's and that my lily white and your toasty brown CAN be best buddies. AM is richer for knowing your Eldest.

It's heartbreaking to consider all of those could-have-been best buddies that were never given that chance.

Okay, I'm crying. For your children and mine and everyone else. We wouldn't have our four kids who were adopted from other countries. It wouldn't be allowed. My stomach is doing flip flops and I feel sick to my stomach with the thought. Oh, wait... MLK fought so we can be blessed with the families we have and we live in a world where our kids can play with, work with, be friends with, worship with anyone they want. Thank you Lord.

Having grown up in the 60's I remember most of the horrors of bussing, the death of MLK and the Black Panther trials. It was scary stuff.

It seems that religion is the more volatile issue of this decade. Less here in the US, but none the less divisive and ugly.

Thank God for the progress we have made in 50 years!

WE are better people for knowing your son and it is SAD to think of all the relationships my parents and grandparents missed out on...