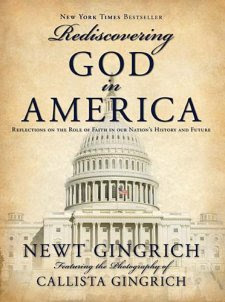 Like it or not, America has a spiritual heritage. It's written clearly all over our documents and all over our federal buildings. And yet many are trying to strip that heritage from the history books and from the social fabric of our country. In his book, Rediscovering God in America

, Newt Gingrich refutes the claims that America is and should be secular with photographic evidence to the contrary.

I am a big fan of David Barton

. If you've never heard of him and this title interests you, you should look up David also. He is very well spoken on this same topic. I'm also a big fan of Newt Gingrich

, both as a writer of alternative history novels and as a political conservative

. So when I saw the combination of "God in America" and Newt Gingrich, I figured I should have a go at it.

The reason I brought up David Barton so early is because if you have heard him speak or read his stuff you are going to have a really strong basis of belief for what Mr. Gingrich writes...and likely know much of what is presented. This is good, because there are absolutely no footnotes to back up what he writes. Aside from photographic evidence proving that someone at sometime believed God was a part of this country when they built structures, anything written could be discarded as hearsay to the disbeliever. I think this is the strongest negative I have about this book (which I really did enjoy). The "other side" is often guilty of leaving out footnotes because we should just believe them (even though they are frequently incorrect). I don't believe that when we have the proof on our side we need to stoop to their sub-par standards.

Again I'd like to point out that I've taken several classes regarding the topic of God and America and the religious beliefs of our founding fathers and I think that though the information that Mr. Gingrich put forth is correct, I also feel strongly that he could have taken a stronger stance. However his final chapter, and his best chapter of the book, gave a call to action that more than compensated for what was otherwise very neutral on the "religious" aspects. (I say religious, because he adamantly held to the term "religious" even at times when he clearly could have said "Christian."Christian may have been used, but if so, it was not memorable.)

(This book was provided for review by Thomas Nelson)

I hate it when revisionist historians try to say that this nation wasn't built on Christian values.Their version of separation of church & state varies greatly from the ideas of the founding fathers who wanted limited government in the church, not vice-versa.

This may or may not follow your post, but I followed a blog on your page to Finland. The guy nailed one thing I understood. " The best way to predict the future, is to invent it " Inventing the future, in my opinion, is to have strong basics to work with.

Now, if I could just find that darn coffee cup. Mrs. Sr. says to quit looking on the ceiling for it. Does that go along with the previous statement? Darn coffee cup. Sr.