I'd Rather be Here 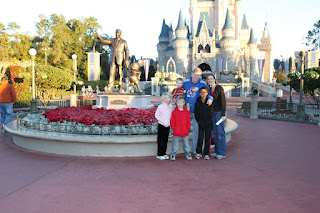 See how empty it is? That isn't an illusion. People weren't polite and getting out of the way of photos. People are very rude, in fact, and care only about themselves and cut lines and run into you at will...but that's another story. This story is about me and my type A personality. There are no people in the photo because it is in the seven o'clock hour at Magic Kingdom. Yes, I did drag my family out of bed at 6:30 to avoid the crowds and lines. Not only that, I had a schedule that I had every intention of sticking to. I got teased heavily. But the teasing stopped by noon. It worked well. Not a significant line until nearly 11. And by then, we'd done nearly everything we cared to do. Planning does make perfect. If you plan to go to Disney World on the busiest week of the year, you need to have a plan. Otherwise you'll spend your whole week standing in lines...or talking about which lines you should stand in. Even if you use the FastPass. I know, because on another day we didn't stick with the schedule and we spent most of the day talking about what we wanted to do and doing nearly nothing. At which point I realized that I only think I'm a type B person. Apparently I'm a Type A personality that masks as a Type B. I really don't care until I DO. And when I DO care, I'm hard core. (We went back to the schedule.)

That castle in the background? I have to admit that the sight of it, the whole package of Main Street, the castle, Disney, taking my children at a really great age, being with the people I love dearly, that package broke forth in tears and I got choked up, right there on Main Street.

I want to leave this gray, dreary, depressing place and go back.

(For Disney World visitation schedules, you should look to The Unofficial Guide to Disney World. They have hour by hour schedules in the back. Though I did significant research into each ride and we skipped those we didn't think worthy of our time. I kind of mushed three schedules into one. Plenty of fun for the grownups, but nothing too terrifying for my children who don't like "dark" themes. Fast scary is OK, creepy scary is not.)
Posted by Chaos-Jamie at 9:33 AM

When my daughter & I went, we were in hunt for Tigger. We got a picture of her and Tigger waltzing in the street.(She was a Sr. in High School)It was the first year of Fastpass.

When my wife & I went (by ourselves, we stayed at one of the Disney resorts and got through the gates shortly after they opened and left when they closed.

You are HIRED! Plan my vacation please!