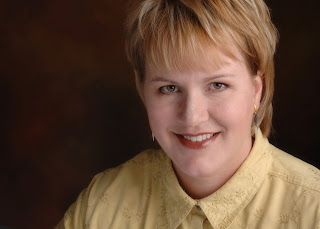 Picture, if you will, my mailbox a couple weeks ago. Books, pouring in. It was a fabulous couple of days. I've decided, contrary to my thinking, that a primary love language for me is receiving gifts, and mail counts...especially when it contains books. Well, in the course of very little time I received very different and yet oddly similar books from two different authors. All were set in Italy in the 1300s. One author was easy to read, fast paced, and fabulous. The other? Though I started it before the other, I've only made it to page 48 in his book.

I am pleased to interview the fabulous author, Lisa T. Bergren, writer of The Gifted series (on sale now at a Target near you! (or at the end of this interview)). Think Medieval Catholic meets Charismata. Or DaVinci code without the heresy. This series rocks! I love the premise that one of Paul's letters (uncanonized) could be prophetic in nature and the characters live the prophecy fulfilled. But before you get all het up, she stays true to scripture.

Oh, and she paints such a great scene she's made the other author readable. There's something to be said for that!

Can you tell us about a chaotic moment in your life (writing or otherwise)?

I used to have a lot more chaos in life, when the kids were babies and you are so NEEDED every hour of every day. As they've gotten older (now 12, 9 and 4), there's a cadence to our days. And I've gotten better about saying no to things that cost me or my family too much--and helping my kids and hubby do the same. My eldest would be involved in something after school every day, if I let her. But then there goes any chance at a family meal, etc.

Writing is most challenging when there's no semblance of routine. So on days when the kids are vomiting, I've discovered a pile of overdue bills, there's five stacks of laundry, nothing in the refrigerator, etc., etc., I just scrub writing and start ticking off the chores and tasks and responsibilities. I just can't concentrate if my life isn't in some sort of order! How can I order a character's life if mine isn't? Since being a wife and a mother and a disciple are all a bigger call to me than writing, the writing has to come after those three.

On normal days, I take care of all those family/house responsibilities in the morning, and write in the afternoon while the girls are in school, often with Jack (my 4 year old), right beside me, playing games, drawing, etc. (And yes, watching at least one movie--something that keeps him occupied for an hour!)

How on earth did you manage to get a Medieval published by the CBA? Way to go! I know people who are having a terrible time of it.

I know it's a hard sell in the CBA. I think the bigger hook in the series idea--a group of people gifted by God and prophesied to come--helped. I almost could've set it in any era, any place, which is a good sign of that age-old "hook." However, only one CBA publisher bid on it, and they have New York connections (as does Berkley Praise--they're part of Penguin), so you never know!


(sorry, the cover isn't right, but it is the right book, I think)

Great post. Thanks so much for sharing me with your readers!