Vacation, as Journaled by Princess, with photos and (commentary) by Mom 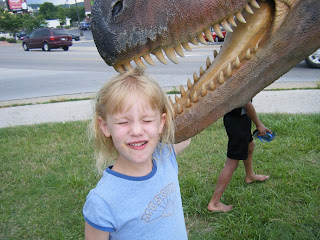 Day 1: first we went swimming. then we went to Wal-Mart. then Arby's (actually we started at Arbys, she must be thinking of Taco Bell, where there was a life size velociraptor out front, but I shouldn't quibble). then we went home and watched ice age. then we went to bed.

Day2: Today I saw lots of turtles. And rode on a trolley. And got poison ivy went home took a bath and watched a movie. (she fortunately left out the part wherein I discovered that they were bathing in a patch of poison ivy the size of Texas and I demanded that they immediately climb into the 58 degree lake, fully clothed, sneakers and all and undo the ivy bath. Yes, I climbed in with them. I feared we wouldn't get it off fast enough and we'd have to come home for benadryl injections (do they do such a thing, I wonder?)) (I don't remember the movie.)

Day 3: today we went to Silver Dollar City. I was really scared on Powder Keg. It was scary on Fire in the Hole. On Powder keg, I cried like a baby. 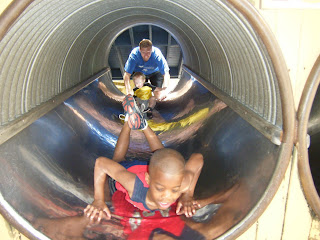 I loved the American Plunge. A guy was tinkling then we went down a giant slide. And got wet. We went on hopping frogs and a rocking boat (as soon as our parents wised up and remembered we are still very young children and maybe shouldn't go on the "very exciting" roller coasters).

Day 4: It's my birthday today. We went to the Butterfly Palace. We went to where butterflies were free (though for the cost of admission, one might question the use of the word "free"). There were lots of different butterflies. We watched a movie with 3D glasses. and did a rain forest maze. And went see rain forest animals. 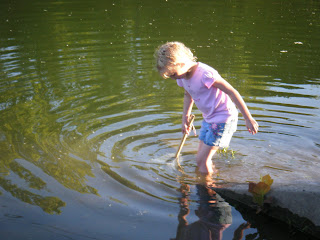 And went to the gift shop (where we spent a god-awful lot of time making our parents listen to us whine about junk we could probably get at home for half the cost but were totally uninterested in looking the the really cool things our parents wanted to buy for us). (Then we went fishing for minnows in the river beside our condo.)

Day 5: today we went to Silver Dollar City (again, you didn't read that wrong) and made a rag doll. (and ran into Frodo's best friend and his family. I was totally shocked. Frodo was uber-pleased as he had spent the entire week fretting that his pal wouldn't know where he was). And got a puppet and went home. (she again fortunately forgot to mention that we were trapped several hundred feet underground in a cave during a lighting storm because they don't run the tram up and out of the cave 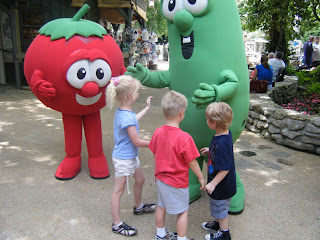 during lightning. As many, many unhealthy individuals were down there with us, we couldn't just walk out. It would have been difficult for us as well as Charming really wanted to crawl around in the bat guano so he was really squirmy and difficult to hold on those wet, uneven paths, stairs and tunnels.)

Day 6: today we went to the pool. And that's all I remember. (complete with a frowny face with a question mark over its head.) (yeah, because it is really hard to remember visiting the fish hatchery, wading in the river, swimming in the (warmer) lake, fishing, hunting for rocks, and the like.) 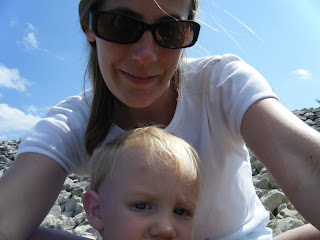 Day 7: Today we went to Silver Dollar City (hey! it was a three day pass!) and had to leave because of a rainstorm. (we were bummed because there were a few rides we intentionally left for the last couple hours that they didn't get to ride, but had been asking for all day.) (I didn't realize those sunglasses looked quite so, um, wide. May have to shop for another pair.)

On our way home: I hate going on a long drive so I made up a verse. here it is. Princess 1:13 when you're bored praise to the God (later changed to the Lord). (We asked her what Princess 1:12 was and she said she hadn't made that one up yet.) 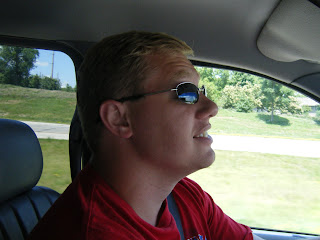 (We're home. We're glad. Even nearly caught up on laundry. You wouldn't believe the stink day old lake swimming clothes can make. I think Hubs is very glad to be home also. I think he is pretty excited to get to go to work tomorrow. He's trying really hard to not be "done" with us, but surely even you can see that straining look on his "happy to be home" face.)
Posted by Chaos-Jamie at 7:55 PM

We are so glad you are back! It looks like you guys had a blast!
Mrs. Nurse Boy

Seriously, hope the break in routine was great. It sounds like fun...