Let me back up.
I don't know exactly WHEN we drove into the project, except at one point Kasaun pointed out that we had entered. Mostly, I just noticed World Vision signs peeking out at me. 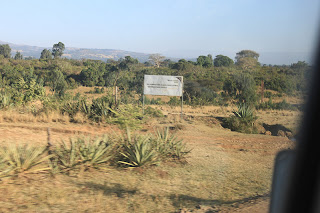 And that it was clean.

Don't hear me wrong, it was still dusty. It was still grimy. I still was breathing dirt and my hair was still filmy. There were still people walking and they were still the color of their surroundings because you can't help but be. But there just wasn't the refuse everywhere, ya know? 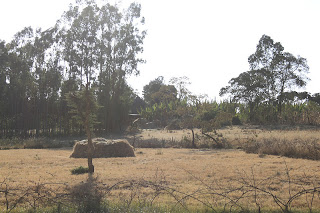 There was a widening in the road and Andreas swung into it and threw the vehicle into park. It was picturesque so my natural thought was that he wanted me to take a picture. It had become norm for them to hear me clicking from the backseat and offer to pull over. I guessed that he had just tired of asking first. 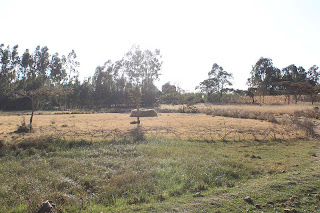 "Well, we're here," one of them said, and threw open the door.

Wait, what?? I knew this was what this day was about, but I wasn't prepared yet. We'd just driven into the project. And it was gorgeous. And where were we going? How far would we need to walk?


About 200 meters, it turns out. Back there, behind that "shrubbery" is a compound (for lack of a better word).

We heard them before we saw them.

(Again with the lack of camera. I'm such a dork.)

We could hear chanting and clapping and the distinct sound of rejoicing coming from behind a fence made of poles lashed together with another organic material (false banana bark? grasses? reeds?). And we ducked through an opening in the fence and stepped into a place most Americans don't really know exists outside of folk tales. 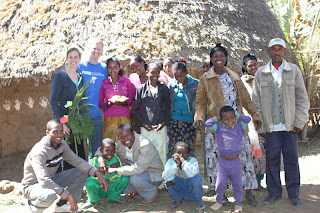 Why yes, that IS a circular mud hut with thatched roof that my sponsor child DOES, in fact, live within. Many of those people are, in fact her family, and do, in fact, live in it also. The rest of them live in the hut that shares the fence and yard with them. The yard where chickens roam. You can't really see it in the picture, but they've scattered reeds throughout the courtyard so you are no longer walking on dirt.

We stepped into a swarm of people dressed in their best clapping and singing....all for us. (They are not all in this photo. It was taken later, when I regained my senses.)

First we were greeted by Almnesh's father, then her mother, and then her. Kisses all around.

Ethiopians kiss greetings. I don't think I've mentioned that. Right cheek, left cheek, right cheek. Accompanied by a shoulder bump, while holding right hands. Three, not four. Though if you go for four, they forgive your Americanism and might proceed to six.

Almnesh handed me that gorgeous bouquet made of who knows what (false banana bark/leaves, grasses, palm, silk flowers is my guess) and then we were invited inside their home.

Again, we had to step up and over while ducking down to make it through the opening.

I'm not sure I can emphasize adequately how the next hour went. I know we were ushered into seats of honor at the table that was prepared for our coming. I felt like royalty.
They had gone above and beyond to make sure we felt welcomed. There were flowers. Cushy seats. Soft drinks. Popcorn. And candles.
The poor flash setting explains a lot of these photos, but they are precious to me, so you have to deal with some blurry mess. 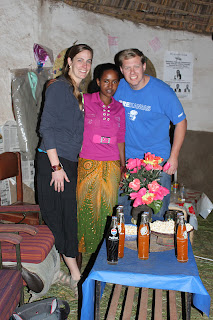 If you can look, you will see that the floor in here is also strewn with grasses. It is dirt. The chickens do come in. The walls are mudded, and whitewashed. And covered with newspapers, I think to keep out the drafts. 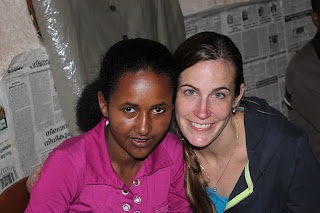 I know I look stoned in this picture. There were no peace pipes being passed around. There were no lights aside from the candles and my pupils were reacting. 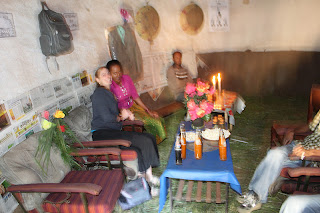 They only had one "closet" which was mainly shelves with their few possessions stacked on them. You can see that their injera baskets are hung on the wall with their few clothes and bags. Their beds (a very few foam mattresses) were stacked along the back wall. The room was probably 15-20 feet in diameter. 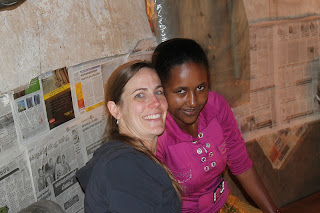 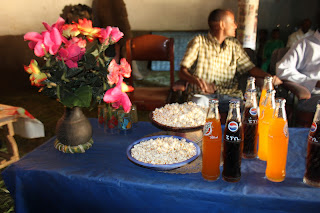 If you gaze over Kasaun's shoulder, you will see people squatted along the back wall. They came and went. We were the main attraction that day. They didn't dare join us, or try to speak to us. Just sat in our presence, but not quite. It was interesting, to say the least. 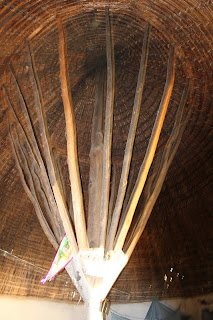 The ceiling. Amazing, no? 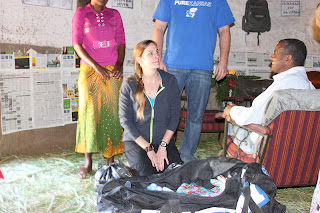 We were told before we went to Ethiopia that we could "bring gifts" but weren't really guided as to what that meant. Some missionary friends suggested fruit, so we went armed with fruit and a few other things. Brent's grandma had made dresses for us to hand out "where we saw need." We brought those with some shirts for boys, expecting to meet village kids. When we asked about it, though, our guide told us that it was best to give them to Almnesh and let her distribute them to the village kids as it would be a great honor for her. So we left those. But while I was digging around in the bag for the gifts we brought for Almnesh, her mother began talking.

A little background which I will expand on in my next post:
A) We have sponsored Almnesh since 2001. The Wonchi Project was formed in 2001. We were one of the very first sponsors. She was probably one of the very first children sponsored. A LOT has happened in Wonchi in 10 years. We were only a very small part of it, but we were in on the ground level.
B) This family has 7 children. There are probably six more sponsors.

(Insert very formal greeting that I don't remember exactly but probably went "Thank you so much for coming today. It means a lot to us that you've come. You have been very generous with us...." yadda yadda yadda)

"Before you sponsored Almnesh, we were very poor. We had nothing. We ate only teff. We lived day to day. And now we are rich."

(insert many more details and much more gratitude)

I was stunned. I am squatting in the dirt in a 15 ft circular room of a newspaper covered mud walled hut with 6 chairs, lit only by candles, where chickens are coming in and out and the lady of the house is crediting ME for making her.....rich.

An amazing experience, Jamie. I know your visit was a blessing.

Wow. That is extremely humbling.

It is uplifting to read about people who are going through lengths just to help others. You've actually inspired me to be a volunteer too. You people are good-hearted with a real vision in mind. On a side note, that's a pretty interesting house. It's amazing how they were able to build houses with just mud as the walls and straws as the roof.