As the next hour progressed, we found out many details about their daily lives. That Alemnesh has another syllable in her name, that her father's name is pronounced with a ch rather than a K, that coffee ceremonies consist of three rounds of coffee (the best I have EVER had), no more, sometimes less, but always three for the honored guest. We found out that our Alemnesh wants to be a doctor and will test into or out of college in May. We discovered that in Ethiopia, if you go into the biological sciences, you learn the whole of biology but not anything of the other disciplines (they were quite surprised that with my background I wouldn't know what type of tree they were talking about even after they gave me the scientific name (I replied with Microbiology, not Botany--conversation ensued)). I found out that Alemnesh would go to a nearby town on Mondays and stay until Friday in order to go to school. There was something lost in translation, so I'm having difficulty remembering if she would no longer have to do so because World Vision built a new high school near by. Though we visited the high school, I can't remember if it was any closer than the town she would walk to on Mondays.

We learned that now they cook on an energy conserving coal stove rather than using firewood which improves air quality and, apparently, uses less energy since a wood fire would have to be maintained all day and this would not (?). They made bread in a communal oven that was off site. We were served some of this bread that was made from their own wheat. It was cooked in a round and served in thick squares. It was a very hearty bread.

We discovered that Alemnesh has three brothers and three sisters and that she is somewhere in the middle. We discovered that the reason her family thinks of themselves as rich is because before sponsorship they hand farmed about an acre of teff and now they farm eight hectacres (17ish acres) of teff, wheat, corn, tomatoes, coffee--which they picked, roasted, brewed and served to us, false banana, onion, a cherry-like fruit, and more. Much that they are able to sell at market and all because WV has taught them farming techniques, provided seeds and seedlings, and taught them fertilizing techniques as well as easing their financial load so they could purchase more land.

When we discussed with Achalo that Brent's family farms and the many, many acres they farm, he made that whistle sound and asked if they had many oxen. We shared a good laugh after we told him we used "cars," "big cars." How do you explain a tractor to a person who has likely never seen one?

Alemnesh's brother came home from seminary to meet us. Or maybe he was home for Genna. Either way, he had a friend along who wanted to share some scripture with us. After the third cup of coffee, he did. He took us to John 14 where Jesus told his disciples that he was going to prepare a place for his them. The speaker then extrapolated to us, "Don't look at our home and pity us. We have Jesus and he is going before us. This world in temporal, but life after is eternal." He said more, but that was the gist. And then he asked if he could ask us a question. "You have so much. Why share it with us?"

I said, "We have been given much. To whom much is given, much is required."
Brent said, "We believe Jesus told us to."

He sat back, shocked. Leaned forward. Brent asked if he had another question. "We have been told America is falling away from God."

We assured him all of America has not left God. It is dividing along the lines of believers and unbelievers and where we used to all pretend to be believers, we now pretty much have to make a choice.

A theological discussion followed wherein they told us that because of World Vision, they are now Christians where before they had no hope. They were trying to share their hope with us. It was beautiful.

That done, and after the opening and drinking of Pepsis (which they REALLY wanted us to have but had great difficulty opening) we toured their homestead. 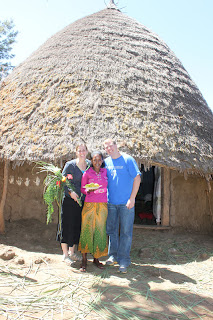 Alemnesh presented us with fruit as well. Directly to the right of this picture is another hut of similar size that shared the fence. The fence had another opening onto their false banana groves. Brent remembers more huts than these two. As he tends to be observant about such things, I will cave to his opinion. 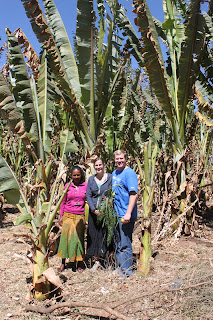 Their false banana groves. They don't need much water, but produce lots of edible bark. I presume it is also roofing material. 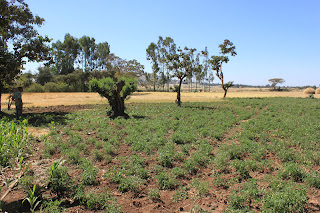 These are their tomato plants. Tomatoes have become a staple in their diet. They can now plant enough to eat AND sell. 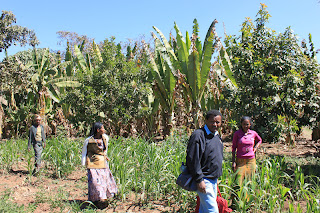 Here we are being escorted through the corn. 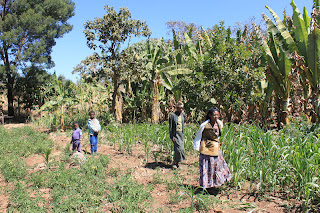 And being followed by children. :) 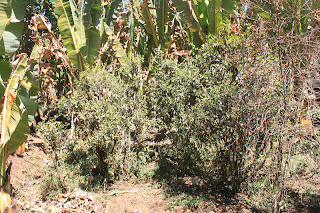 Coffee plants. And they proudly showed me that they fertilized with manure. 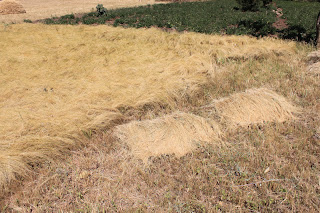 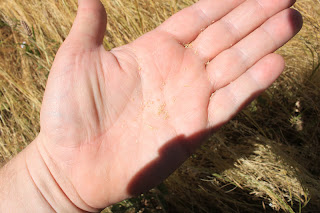 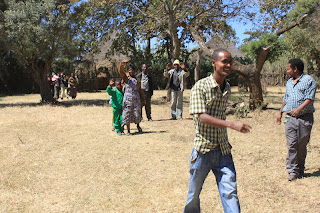 And after Alemnesh's mother asked if she could cook us lunch and the World Vision guys told her that WV was cooking us lunch at their headquarters, they escorted us away. It was hard to walk away from them. They dropped off one by one. Alemnesh's brother and his friend led us, Alemnesh walked with us, but the rest walked about halfway and waved us away. Her friends were coming home from school, so we caused quite an uproar on the road.

She's such a shy, gentle girl, my Alemnesh. And so grateful. I miss her. 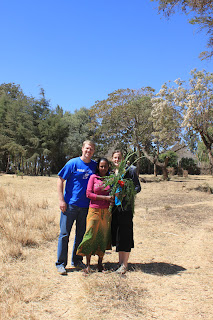 But it wasn't the end of the day, not by a long shot.

This is my favorite thread of posts right now. You are an excellent writer. It's like I got to go with you. I would like to explain to Alemnesh that we are buying oxen/cars on ebay.