I'm one of those people who thinks God talks to me. For the sake of this post, I'm going to be unapologetic about it. I know my atheistic friends probably think that, at best, I have a good imagination and, at worst, have a mental disorder. And I suspect many of my Christian friends have similar thoughts.

I rarely tell people, "God told me thus-and-so," because it seems so presumptuous, but hey, if I told you even half of the things God has said to me in a typical day, I wouldn't shut up. So, let's just, for the moment, pretend it's a bi-weekly occurrence and leave it there for now.

We'll leave out the dialogue over dishes and the sarcastic remarks throughout the day.

On Thursday morning I was having a real pitty pot party. Just super discouraged, mad at the world, angry about the adoption process. Frustrated with people. Over tired. Life is good. Emotional life is black. Get it?

So I was crying into my coffee, figuratively, of course, when God, in His fashion said, "Jamie, you need to do something nice for someone else today. This needs to stop."

I immediately knew what I needed to do and for whom. Except the list kept growing. And before you know it, I was dropping casseroles at the nether reaches of town. (Which, incidentally, is about one square mile, but for the sake of our conversation, I was running "all over town" delivering dinner to people without even warning them that I was coming.)

The first ones were easy. There was an obvious and legitimate reason for bringing food. I didn't much need to explain myself. But eventually I was getting confused looks and statements of "You didn't have to do that."

Actually, I did. Please don't ask why. Because then I would have to tell you that God talks to me and then you'll think I'm One Of Those. Which I AM, but, you know. The favor of man and all. It gets complicated. What if God doesn't talk to you and then it's like I'm trying to sound holy and I don't care for holy sounding people that are also sometimes jerks and you'd think that if God really talks to me I'd do a better job of serving Him than I do and I don't so Pleasepleaseplease don't ask. Because I'm so tired of being a hypocrite.

Important aside: I felt much better. Not after delivering dinner. The moment I decided that, yes, I would.

SO, it should now come as no surprise to you when I tell you that yesterday morning in the shower. I was ruminating on a passage I'd just read in 7, And Experimental Mutiny Against Excess. Lots of stuff flashed through my mind. The name it / claim it crowd. The crowd that insists that God will give His people everything they want. The people who think you should have nothing. The book of James. My house. My stuff. What's right. What resonates. And the statement I heard a lot when I was showing my friends photos of my new house before we moved. One phrase kept popping up.

"Wow. The Lord has really blessed you."

But in the shower yesterday morning while I was ruminating and thoughts were falling all over themselves and voices were echoing with, "Wow, the Lord has really blessed you...."

God said, "What are you going to DO with it?" 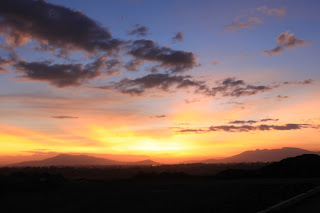 You may actually be the next Joyce Meyer (sorta) person Just about the time you were in this fog, she was saying the best way to get out of a stinkin thinkin mode is to bake cookies and go give them away.

Now if I could just find my coffee cup - Mrs must have found a new place to hide it - think I'll look in the cookie jar. Sr.

I'm glad I was one of the recipients of a casserole...you saved this tired old pregnant lady a lot of time on her feet :). It was delicious and I felt very blessed!