Solidarity with: Uganda
We ate: 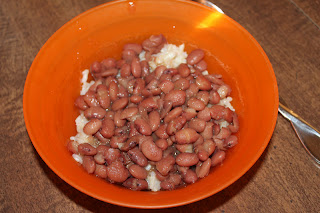 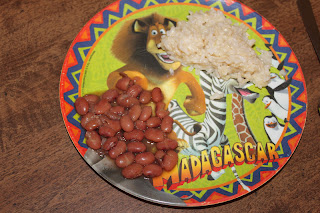 Rice and beans. I, together, Charming, separate.
I'm sure the tableware brings out the utmost envy in your heart. Enter the plastic Wal-Mart clearance bowl and the garage sale melmac plate.

Interesting aside: When we were still dating, Brent called me and while on the phone, asked what we were having for dinner. I told him "beans" which we had often. Either cooked, mashed, refried, wrapped in a tortilla, with ham or without and sometimes with cornbread. It was very normal eats in my childhood. He asked what else and I told him just beans. He responded with something very near to, "If my mother ever just served me beans for dinner I would kill her."

After I got to know him better and ate at his house a few times, I realized that his mother's version of beans would be pork-n-beans and even then are a huge rarity. They aren't a bean family. It makes a little more sense now.

Once we got married, I eventually gave up making beans because I'd have to endure Brent's comments about the smell of beans cooking "gross" and when we'd have burritos, he'd fill up a tortilla with a pound of ground beef and nothing else and there would be nothing left for the second burrito.

Then last year, he read a book that told him the solution to all his weight problems was beans. And suddenly he wanted me to cook beans. I gave him the "You have GOT to be kidding" look and lecture. But after 15 years of a nearly bean free existence, I can now cook beans and he pretends to be grateful.
Or maybe the solidarity thing is kicking in across the board. Because no one complained last night. (Charming did ask for a tortilla, as did Eldest. I complied.)

I found that beans and rice is actually very substantial. Where after eating spaghetti for dinner, we are usually all very hungry again by 7, I was satisfied all evening.

Labels: A Place at the Table