The Flowers of Grass by James E Robinson 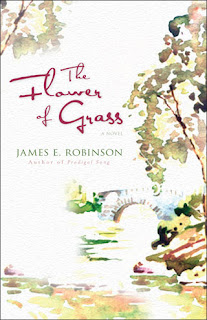 And, to keep things balanced around here, for those of you that DON'T like chick-lit...

I was interested in this book because, frankly, I'm a sucker for the high school sweetheart story. Nothing makes me go all ooey-goey with my honey like a good high school sweetheart story, I tell ya. And though this isn't necessarily the way I want one to go (she married someone else--the nerve! BTW, that happened before the book opening, it isn't the final chapter) it still did my marriage good while thanking my Loving Heavenly Father that my boyfriend took me with him while seeking his fortune (not that we've found it yet).

"John Allen returns to his home town after the death of his alcoholic, abusive father. He has been gone 16 years and has become a successful writer, but with major addiction problems of his own. Now he struggles to make amends with his careworn sister and dropout younger brother--and , perhapse, tovpick up the pieces of his teen age love affair with Jessie.

But Jessie has grown tired of waiting for letters that ceased to come, and has married. At what cost might their love be rekindled?

An exquisitely written, passionate and thoughtful novel, this is a classic love story framing deeper themes of morality and passing time, the true nature of faith, and the delicate balance of human relationships."

So, for you non-chick-litty, literary types (of which I am also one), this is a small town, kinda southern-y feel book filled with poetic phrases and characters you are pretty sure you know. "Gentle readers" be warned that there is a bit of language, spoken by people who would speak that way, that is one of the reasons I'm pretty sure I know one of the characters. He was our best man. (The best man, however, to the best of my knowledge isn't drowning his sorrows in a bottle.)

And I did keep flipping the book over to recheck that this was indeed an Christian Fiction book because I wasn't sure I liked where it was going, but I assure you, the ending was very satisfactory.

You can read more about The Flowers of Grass and the author, as well as find a place to buy it here. Oh, and while you are there, watch the book trailor. It is set against a song written by the author (who was/is a songwriter first). I LOVE THIS SONG.
Posted by Chaos-Jamie at 9:51 PM