Would the Commercials Stop Already!? 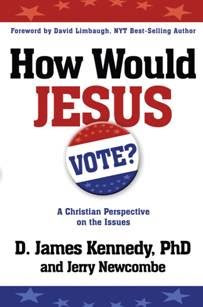 I'm planning to go in early to vote. There's a site only a few blocks away. And the closer we get to elections the more irritated I've been getting at both sides. I figure I better vote before I decide I don't want to elect anyone. But this is as good a time as any to remind people to vote your conscience. Not just your party line. Not just because you heard a TV ad that made the other guy look like an idiot, but because you know where they stand and that they represent your ideals, whatever they are.

Mine begin and end with Jesus. And the dudes that get the closest to what the Bible says He said. Though some days I wonder about them all. How Would Jesus Vote?

The 2008 election is shaping up to be one of the most important political contests in American history. In fact, Dr. D. James Kennedy believes it will be a watershed moment that could impact our very survival as a nation under God.

Values voters—people whose political views and votes are based on their faith in God—are being targeted as never before. As the campaign season moves forward, the significant players will debate terrorism, radical Islam, nuclear threats, global warming, social issues, gay marriage, immigration, education, health care, and many other essential issues that can create sharp ideological divisions.

Into this overwhelmingly complex political situation, Dr. Kennedy and Jerry Newcombe bring a clear, compelling, and nonpartisan exploration of what God’s Word has to say on these critical matters. How Would Jesus Vote? isn’t intended to tell readers which candidates to support; rather it offers a Christ-centered understanding of the world to help readers draw their own political conclusions.

Jerry Newcombe is senior producer for Coral Ridge Ministries television and has produced or coproduced more than fifty documentaries. The host of two weekly radio shows, he has also been a guest on numerous television and radio talk shows. He is the author or coauthor of more than fifteen books.

Dr. D. James Kennedy is one of the most trusted and recognized Christian leaders of our time. The senior minister of Coral Ridge Presbyterian Church in , , he is the featured preacher on television’s “The Coral Ridge Hour” and radio’s “Truths That Transform”, syndicated on over one thousand stations throughout the The founder and president of Evangelism Explosion International and chancellor of Knox Theological Seminary, he is the author of more than sixty books, including the bestselling What If Jesus Had Never Been Born?

Neither is a perfect choice, but I have to go with the one who is pro-life, and hopefully wouldn't appoint liberal supreme court justices.

You are lucky you have early voting. I have to wait until tuesday, and I can't IMAGINE the lines.