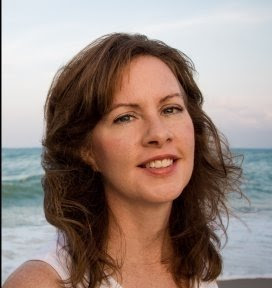 I'll just keep mixing it up on ya. Just when you think you know what to expect. First a little chick-lit, then a little literary fiction, next some romance (which is the only thing my mother thinks I read).

Here's a book that really struck a chord with me spiritually. I'm not sure if it was just a matter of the "right thing at the right time" or if it would do it again and again on many a reading, but boy could I relate to Elle. Not in the single-chick-whose-life-is-falling-apart way, but in the how-far-have-I-strayed-from-who-I-really-am-and-what-God-wants-from-me? way.

I hope it resonates with you as well.

Here's a bit about the book:

Elle's living the dream-but is it her dream or his?

Elle loves life in Beaufort, South Carolina-lazy summer days on the sand bar, coastal bonfires, and dinners with friends sharing a lifetime of memories. And she's found her niche as the owner of a successful art gallery too. Life is good.

Then the dynamic pastor of her small town church sweeps her off her feet. She's never known a man like Jeremiah-one who breathes in confidence and exhales all doubt. When he proposes in the setting sunlight, Elle hands him her heart on a silver platter.

But Jeremiah's just accepted a large pastorate in a different state. If she's serious about their relationship, Elle will take "the call," too, leaving behind the people and place she loves so dearly. Elle's friendship with her new tenant, widower Heath McCord, and his young daughter make things even more complicated.

Is love transferrable across the miles? And can you take it with you when you go?

Rachel Hauck is the author of ten, going on eleven novels, and has recently become an "acclaimed" author. (Yeah, funny how that happened. Some dude found her lottery stub stuck to the bottom of his shoe and tried to "acclaim" her. But her husband refused to pay out.)

Since then, she's gone on to become a best selling author of Sweet Caroline.

Living in central with her husband of sixteen and a half years, one sweet little dog and one ornery cat, Rachel is a graduate of and a huge Buckeye football fan. One day she hopes to stand on the sidelines next to Coach Tressel as a famed, acclaimed best selling OSU alumni, beloved for her work in literature and letters. (She's written at least a couple hundred letters in her life time.)

Her current release, Love Starts With Elle (July 2008, Thomas Nelson) is set in the lowcountry, and earned 4.5 Stars and Top Pick from Romantic Times Book Club.

Look for her next release next spring, The Sweet By and By, the first book in the Born To Fly series with award winning country artist, Sara Evans.

Of the writing journey, Rachel says, "I'm humbled by the amazing things God is doing in my life. I love what I do, and am so privileged to work with Thomas Nelson fiction and am excited to see what God has in store for all of His authors and writers. Just keep praying and writing!"

And if you go here, you have a chance at a free copy!

I loved this one too. There were several insightful passages. Definitely worth the read.